Our history began in 1979 when 15 people responded to an ad in the Union asking if there was any interest in forming a Jewish Community Center. The first event to be held was a lox and bagel brunch. Next, High Holiday Services were held in the home of Karen Wolfson. A Passover Seder followed in 1980 at the Holbrooke Hotel. At this event, it was decided to continue to organize activities and the group officially named themselves “The Nevada County Jewish Community Center”. It was decided to limit the religious activities, but to observe the High Holidays, a Passover Seder, Chanukah Party, and a Purim Party. Social activities were paramount. A Board of Directors was elected for a one year term, and dues were $18 to pay for a monthly newsletter.

August of 1980 brought about the beginning of our presence at the County Fair with the construction of the Bagel Booth which became a major fundraiser for the Center and still is to this very day. In 2011, the name was changed to the Corner Deli. Taking us back to 1980, the Center began to hold once a month Shabbat Services in the Sierra Presbyterian Church, and took over maintenance of the two Jewish Historical Cemeteries in Grass Valley and Nevada City. We continued to evolve with the Nevada County Jewish Community Center (NCJCC) becoming legally incorporated in 1984.

Our first Torah was donated to the Center by Judd and Grace Trotter in 1985 in memory of their grandson, and an Ark was commissioned to be built by Lenny Gorsky. In May of 1994, we moved into our present home on Walsh Street having purchased the building from the former Abundant Life Church. Since then, our congregation has grown to over 90 families, offering a religious education from preschool throughout post Bar/Bat Mitzvah and Confirmation. Our first Sunday School classes actually began in the 1980’s. 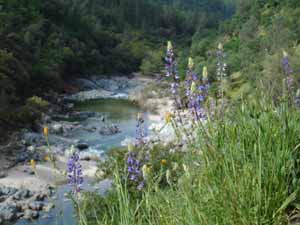 Michal Kohane was the congregation’s first lay Rabbi (1990-1998). Over the years, Rabbi Harry Roth, Rabbi Yossi Caron, Rabbi Matt Friedman, Rabbi Michael Oblath, Rabbi Alan Greenbaum, Rabbi Myra Soifer, and Rabbi Seth Castleman served our congregation. On July 1, 2016, Rabbi David Azen began serving congregation B’nai Harim. Rabbi David brings a calming demeanor and challenges our thinking during his thought provoking sermons and teaching facilitation. He is committed to the Reformed Judaism philosophy and works to engage and communicate with our members and guests. He mixes in a little comedy with the serious discussions, and has been well-received.

We continue to be a growing presence in Nevada County with our annual “Deli Nite” fundraiser which is open to the entire community. Congregation B’nai Harim at the Nevada County Jewish Community Center offers a place of worship and a warm “Jewish Home Away From Home” in the Gold Country.We are dedicated to the preservation, continuity and enrichment of the spiritual, communal, ethical and cultural teachings of Judaism.

Ever since the days of the gold rush in 1848 there were Jewish families here. They lived here, worked in the mines here, owned shops here, raised their families here and died here. In fact there are two Jewish historical cemeteries in the Grass Valley, Nevada City area and a goodly number of articles were written of the contributions by Jewish families to the development of the Sierra Nevada region. Click here for The Union article on the history of Jews in the Gold Rush by Gary Noy.

This is a good place for living, working, and retiring. It is a great place to raise a family, enjoy the recreational opportunities, participate in the cultural activities, and join in the Jewish community with spiritual religious camaraderie. If the possibility of doing any of these things in the foothills interests you let me give you further information and perhaps throw fuel on the fire of your curiosity.

We have that perfect blend of four seasons and even the possibility of a little to lots of snow depending on the elevation you select. When it rains, November to April, it really rains. We receive 50 to 70 inches of the wet stuff so there is plenty of water for our rivers and lakes. When the sun shines it really shines and the bright blue skies are the result of a 1,500 to 3,500 feet altitude. If you are a ski buff we’re less than a one hour drive to the best slopes in the state. If you like the high rolling, Reno and Lake Tahoe are nearby.

We have beautiful homes and simple homes. We have expensive homes and, while it’s hard to believe these days, we have inexpensive homes. Town, suburban, rural and way out in the boondocks homes. If you want it we’ve got it.And we also have an excellent school system at all levels to the community college level. We are only a one hour drive to Sacramento State University, or one hour and twenty minutes to the University of California, Davis. But perhaps best of all we have an active, thriving, growing Jewish community in our own happy community center. We welcome your inquiry for further information.